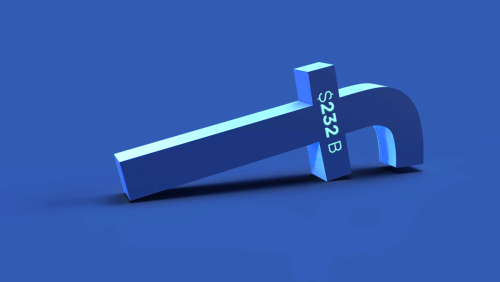 Investors lost faith in Facebook in February 2022 because of continued political pressure and a rare long outage of the company’s apps, sending shares down 4.8% and wiping billions off CEO Mark Zuckerberg’s fortune.

The stock of Facebook was under pressure from two sources: an unusually long outage of its namesake platform, Instagram, and WhatsApp, which cost the company tens of millions of dollars in revenue.

(In the most recent quarter, it generated approximately $330 million in sales per day.) The last time Facebook experienced a blackout like this was in 2019 when the network was shut down for 14 hours.

It had gone dark for a day a decade before, in 2008. Monday’s outage also impacted Facebook’s internal systems, making it impossible for employees to access emails, the internal messaging system known as Workplace, and, according to reports, some doors at the company’s headquarters.

Another issue weighing on Facebook is a congressional hearing on Tuesday, during which a former product manager, Frances Haugen, will testify about her decision to become a whistleblower and leak internal data to the Wall Street Journal. 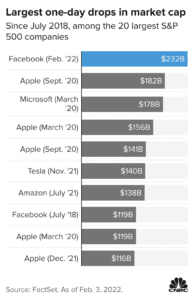 In a 60 Minutes interview last night, she chastised Facebook for prioritizing “profits over people” and failing to maintain anti-misinformation safeguards after the 2020 presidential election.

However, the Facebook stock has proven surprisingly resilient in the face of recent scandals, such as last year’s ad boycott and the January 6 riots. Shares remain near record highs, closing Monday at $326, a more than 150% increase in five years.

Executives blamed the poor results on a variety of factors, including Apple’s iOS privacy changes, which made targeting ads to users more difficult, and “supply chain disruptions,” which are causing advertisers to spend less. The issues are unlikely to be resolved soon.

Meta also revealed that it will spend an astounding $10 billion in 2021 on projects related to the metaverse, none of which will generate significant revenue. The company predicts that people will use the metaverse in the future, and those big investments now in preparation will give Meta a leg up on competitors.

Still, Zuckerberg has yet to persuade investors why his company should spend so much money on the metaverse when its current business is suffering from slow growth, privacy issues, and a weak ad market.

The latest earnings only add to the complications. Facebook’s rebranding to Meta comes as it tries to distance itself from past crises like Cambridge Analytica and recent whistleblower leaks that showed the company failing to combat misinformation and abuse.

Meanwhile, Spotify shares plummeted on Wednesday, falling nearly 23% at one point in after-hours trading before recovering to a 10% loss after the audio streaming giant revealed its own bad news.

It predicted 183 million paid subscribers by the end of the current quarter, falling short of the 184 million predicted by analysts. The slower-than-expected user growth coincides with Spotify’s dealing with a high-profile boycott by musical artists such as Neil Young and Joni Mitchell.

They had asked Spotify to remove their music because podcaster Joe Rogan had invited guests who had made controversial comments about COVID-19.

“Usually when we have controversies in the past, they are measured in months not days,” Spotify CEO Daniel Ek said during an earnings call with analysts. “But I feel good about where we are.”

The seven biggest drops in stock market history have all occurred in the last two years, as Apple, Microsoft, Tesla and Amazon have ballooned in valuation.

Prior to 2020, the largest drop was from Facebook — a $119 billion decline in 2018. That also occurred after Facebook forecasted revenue below analyst estimates.