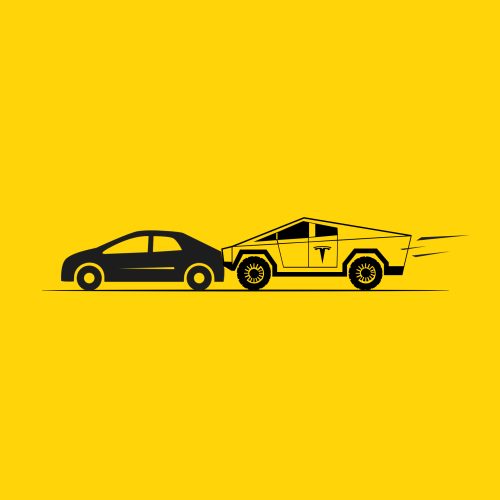 Tesla is mystic, unique, and way beyond the features of any traditional automaker.

Unlike Tesla, the traditional automakers are bureaucratic, low-responsive, and are culturally different from a software company.

Tesla on the other hand is not merely selling cars; it sells technology. The traditional automakers know it.

The biggest challenge VW and other leading automakers face is that they lack the expertise required to compete in the age of the software car.

Tesla and its flamboyant, and sometimes erratic, innovator Elon Musk have turned the more than a century-old industry upside down in a mere 16 years.

Tesla’s speed in innovation in the market for high-end vehicles is more like that of a tech company than an automaker. And its soaring market valuation is a clear sign to all automakers that they’ll need to develop more innovative, Tesla-like business models to survive.

Some stats and facts to prove it:

And as the sole player, the company has to not only sell cars but also build out the infrastructure necessary to support the operation of those cars.

So what makes Tesla Unique?

First, Tesla operates in the long-range EV segment of the market comprised of electric vehicles. Essentially, these are vehicles that can run more than 200 miles on a battery alone.

The only car in the market that offers this value is the Tesla Model S. When Tesla releases its Model X SUV later this year, there will be two cars on this market.

Even though Tesla missed its target of 35,000 deliveries last year by just under 10%, Model S sales still grew by over 30%. In 2015, Tesla is targeting a sales growth rate of over 66%. That is a tough target but sales of the new Model X can help.

According to the company management, the Model X has managed to generate as many as 20,000 deposit-backed orders already, and all this without any advertising or even the display of a production version of the car.

Second, the next unique thing about Tesla is how easy is the buying process. Simply put, a customer has to go online, choose a specific model, add any customization, pay a deposit, and finally schedule a pickup for the car.

This is the simplest that it could get to buy a car. No hassle, no wastage of time, and you have a car. Tesla does not advertise to attract customers, instead, let the customer find them.

This is topped by the low cost of ownership from the perspective of a customer.

Looking at the number of parts in a car; tesla cars have around 20 as compared to 2000 in internal combustion engines; combined with the benefits of no oil changes, no tune-ups, and so on.

The customer is in control when it comes to tesla; Consumer behavior patterns are an important trend for Tesla. As oil prices rise and battery prices fall, it may become more attractive for consumers to purchase electric vehicles.

Once there is a clear economic rationale to purchase electric vehicles, there could be a surge in demand.

Other factors affecting consumer behavior will be the maintenance costs for electric cars vis-a-vis internal combustion engine cars and the resale value of electric cars.

Third and the best of all is the ability of the automaker to integrate software into the hardware. This works in the same way as it will for any tech-related company like Apple, Google, or Samsung.

This enables the company to improve its cars’ software functionality every few weeks. This is in sharp contrast to the traditional auto industry model where the product is the same for as long as you drive it.

Least to say, Tesla was founded and is run by a team of people committed to the idea that the passenger car can be both exciting to drive and friendly to the environment, that performance and environmental sensibility aren’t mutually exclusive.

And while the cost isn’t low, it’s a price that customers are willing to pay.