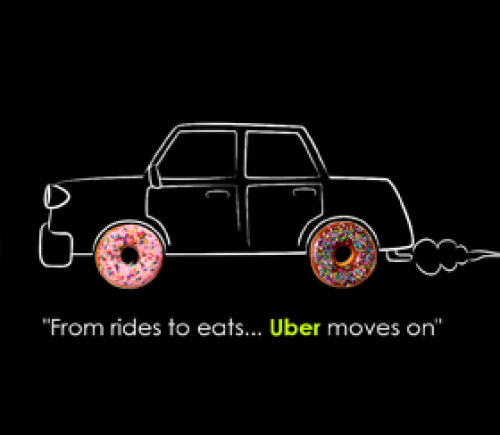 Nothing has been typical about Uber. With a rule breaking business model, the company has expanded across the whole world. In early 2020, Uber joined the list of fortune 500, and unfortunately we might see the fall of Uber from the list next year. Reason? The current Global Pandemic! At the beginning of the year, the company expected to earn profit from its Uber-rides business. The company’s Uber-Eats business was instead leaking money and was not expected to make much of a profit.

In March 2020 everything started changing due to the pandemic. By the end of May 2020 the company’s passenger trip volume plunged downwards by 80%. And suddenly Uber’s food delivery business started to look like a near saviour for the company. The Uber-Eats business has seen a slow but sharp increase in its growth as people prefer to eat in during the pandemic. Even before the crisis Uber had maintained that it has another winning business line in its portfolio as Uber-Eats showed promising growth. In April, Uber Eats saw global volume perk up by 89% (not including India, which Uber is exiting about). Even in a quarter when its business was surging, food delivery made up 23% of Uber’s overall sales, up from 18% for all of 2019. And the “take rate,” Uber’s share of the total check, is around 11% on food orders, roughly half its haul for a passenger trip.

Uber Eats is an obvious bright spot for the company, but even that is under strain thanks to regulatory pressure and competition from other players like GrubHub and DoorDash. Uber Eats saw an acceleration in demand since mid-March with 89% year-over-year gross bookings growth in April excluding India, Khosrowshahi said.

What does stats tell us about the impact of Pandemic on Uber?

In the first quarter of 2020 the company reported a revenue of $3.54 billion. The ride hailing business, however, showed a fall of 3% in its gross bookings. This represented a total of $2.9 billion loss for Uber in the first quarter of 2020. While taking to the investors, the company’s CEO Dara Khosrowshahi said, ‘’I won’t sugar-coat it, Covid-19 has had a dramatic impact on Uber rides business.’’ This has affected the people working for Uber in a drastic way. At the start of May this year, the company announced 3700 job cuts which was added by a further 3000 by the end of the same month. The total job cuts made up to 25% of the total global workforce. Moreover, the company also announced that 40 of its offices worldwide will be shut down. This has been done with the expectation that these layoffs and cost reductions will save $1billion annually.

Looking at the other side of the coin:

While company’s ride hailing business is at the receiving end of the pandemic, the Uber Eats food delivery service has seen positive growth at the same time. In the first quarter of 2020, the business has seen a 50% increase in the gross booking as compared to previous year. Uber is also said to be in talks to acquire food delivery company GrubHub, with reports saying that a deal could be reached in a matter of days.

In conclusion, it seems like that Uber and other sharing economies are expected to feel the devastating effects from the pandemic which has impacted the economy and made travellers more cautious.  According to Daniel Ives of Wedbush Securities in a research note, “On the other side of this dark valley, the Uber business model will likely look a lot different for the next few years [at least] and the company must rationalize costs and a smaller operation to focus on attaining profitability in this ‘new normal’ backdrop,”.