The Rise and Fall of Nokia Lessons Learned so far 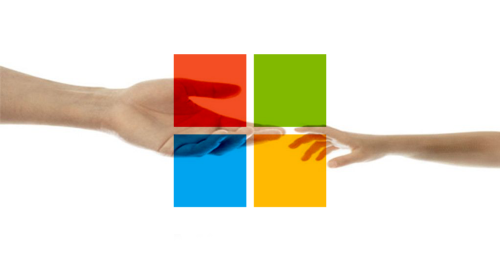 The Rise and Fall of Nokia Lessons Learned so far

We have witnessed companies moving up the unparalleled ladder of success and domination in their industry. Some of the others are remembered for the missteps and misfortune and eventually their downward spiral into Unknown. And after them, we have the rare companies that somehow manage to do the both, and that is Nokia for you.

Let’s start by digging a little bit into the history of Nokia. The company was founded as a pulp mill in 1865 in Finland. In the early 1900’s the company made galoshes. It was only after 1922 when the company would enter what is today known as the “tech space”. They were acquired by the Finnish Cable Company and were charged with manufacturing materials for the telephone and telegraph industry. It was near the end of the 20th century when Nokia would take the form we know it as today. When mobile phones began going mainstream in the 1990’s, Nokia decided to cut lose all other business ventures and focus solely on mobile telecommunications. It would not take long for the Finnish company to dominate the space.

Prior to the days of the smartphone, virtually everybody owned a Nokia cell phone. But the unthinkable happened—Nokia faded away and was overtaken by its competitors. Until 2007, Nokia was the champion in the industry. With the release of Android and iPhone smartphones, things start to change for the company. In the coming 5 years, Nokia was looking at a huge loss translating into 90% of market value. The loss can be visualised by the fact that the company had a market share advantage of 76% over Samsung and by the end 2012 this had changed to a deficit of 42% against Samsung. In the smartphone business, Nokia owned more than 50% of market share at the start of 2007. By the end of 2012, the company’s smartphone market share had dropped to almost zero. 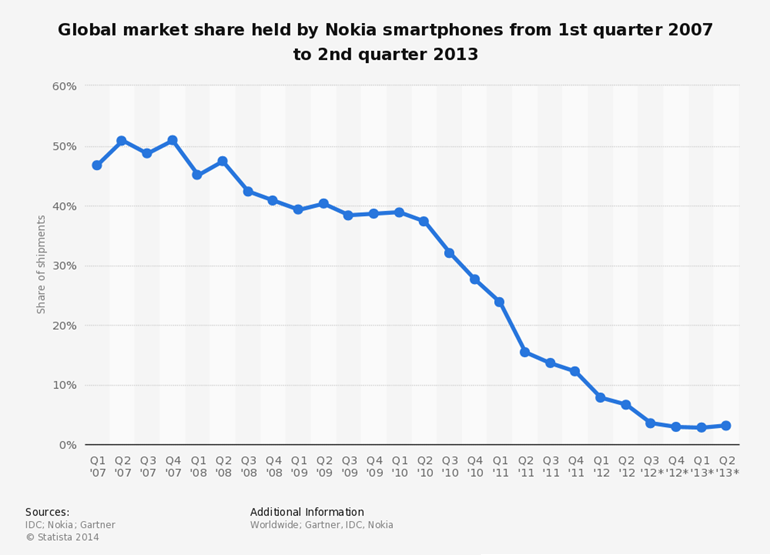 There is no single reason that can be pinpointed for this downfall, and different experts have different say on this. The downfall of the company was so significant in the business world that experts have different speculations in regard to what exactly happened. On the outside, it is quite easy to conclude that the major reason was the company was a victim of business disruption and the company’s inability of adapt to change. However, there are other underlying reasons as well.

Nokia was a dominant player in the markets of Europe and Asia. The company was so strong in these markets that they did not care about North American Market which contributed only 7% of the business. The fact the company dismissed North America as its potential market lead to other companies like iPhone and Samsung to dominate. By the end of 2011, Android and iPhone had more than 10 times the market share of Nokia.

The Nokia was the Apple of cell phone business till 2007. The company also pioneered LTE technology and 3G. But with the emergence of smartphones, the company found itself totally unprepared for the change. The market after 2007, was not only about how a phone looks like but also what things you can do with a phone. Apple saw the phones as mini computers while Nokia still saw them as traditional style phones.

According to Quy Huy, the professor of strategy at INSEAD, “This (company culture) led middle managers to over promise and under deliver. One middle manager told us that ‘you can get resources by promising something earlier, or promising a lot – It is sales work’. This was made worse by the lack of technical competence among top managers, which influenced how they could assess technological limitations during goal setting. As one middle manager pointed out to us, at Apple the top managers are engineers. ‘We make everything into a business case and use figures to prove what’s good, whereas Apple is engineer-driven’. Top managers acknowledged to us that ‘there was no real software competence in the top management team’”.

In 2013, the company was acquired by Microsoft in a deal worth 3.79 billion euros. Since then, the company has come back with a new line of smartphones. We hope to see the company around for years to come in the future.