Apple Inc. – A Giant with a Market Value of $2 Trillion

The day was Wednesday, 19 August 2020 and the clock was nearing 11:00 ET when Apple once again showcased its commanding role in the world economy by becoming the first U.S. Public Company to reach a market value of $2 trillion. Surprisingly it took the company only around 2 years to double its Market Value. The valuation was reached based on more than 4.3 billion share count valued at $467.8 on the stock exchange. Two years ago in 2018, it was the same month of August when Apple first reached a market cap of $1 trillion. Apparently the company is the only and the first U.S company to reach $2 trillion market value.

Shares of Apple rose as much as 1.4% to $468.65, eclipsing the $467.77 mark needed to reach the milestone. They ended the day up 0.1% at $462.83, putting the company’s market value just below $2 trillion by the end of the day. The stock has more than doubled from its March low, courtesy to its iPhone business and a steady demand of its devices. The stock is up around 57% so far in 2020 on booster from the strong forecast-beating earnings despite the Covid-19 pandemic and optimism over its forthcoming 5G iPhone. In the past year, shares have risen more than 120%.

Percentage change in the Market Capitalization of Apple Inc. from 2011 onwards (Fig. 1): 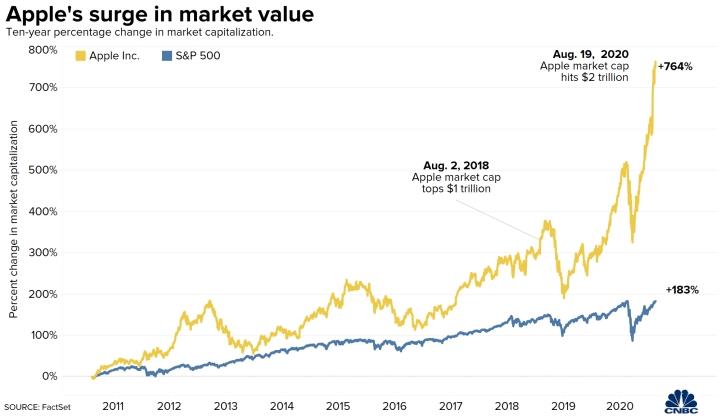 On 1st April 1976, Apple Computers Inc. was founded by Steve Jobs and Steve Wozniak. The company remained private up until 1980 and later went public the same year selling around 4.6 million shares at $22 each. The major landmarks in the history of the company have been the launch of Macintosh computers in 1984 and the launch of first iPhone in 2007. Surprisingly it was not until 2015 when the company joined the elite club of company with names like Intel, Cisco, and Microsoft. Three years later, the company became the first U.S. Company to reach a market capitalization of $1trillion.

Looking at the major reasons behind such growth; as per a repor  t by Verge, the iPhone 11 was one of the best-selling smartphone in 2019, just behind Apple iPhone XR, selling close to 12 million units. Moreover, in 2019, Apple shipped more than 30 million Apple Watches across the globe. That was a 36 percent jump as compared to the previous year and it went on to become the best-selling smartwatch in 2019 (timenownews.com).

Apple has also thrived during the pandemic, as many people were forced to stay at home(Fig.2). The company has benefited from work-from-home trends and strong online sales (forbes.com). 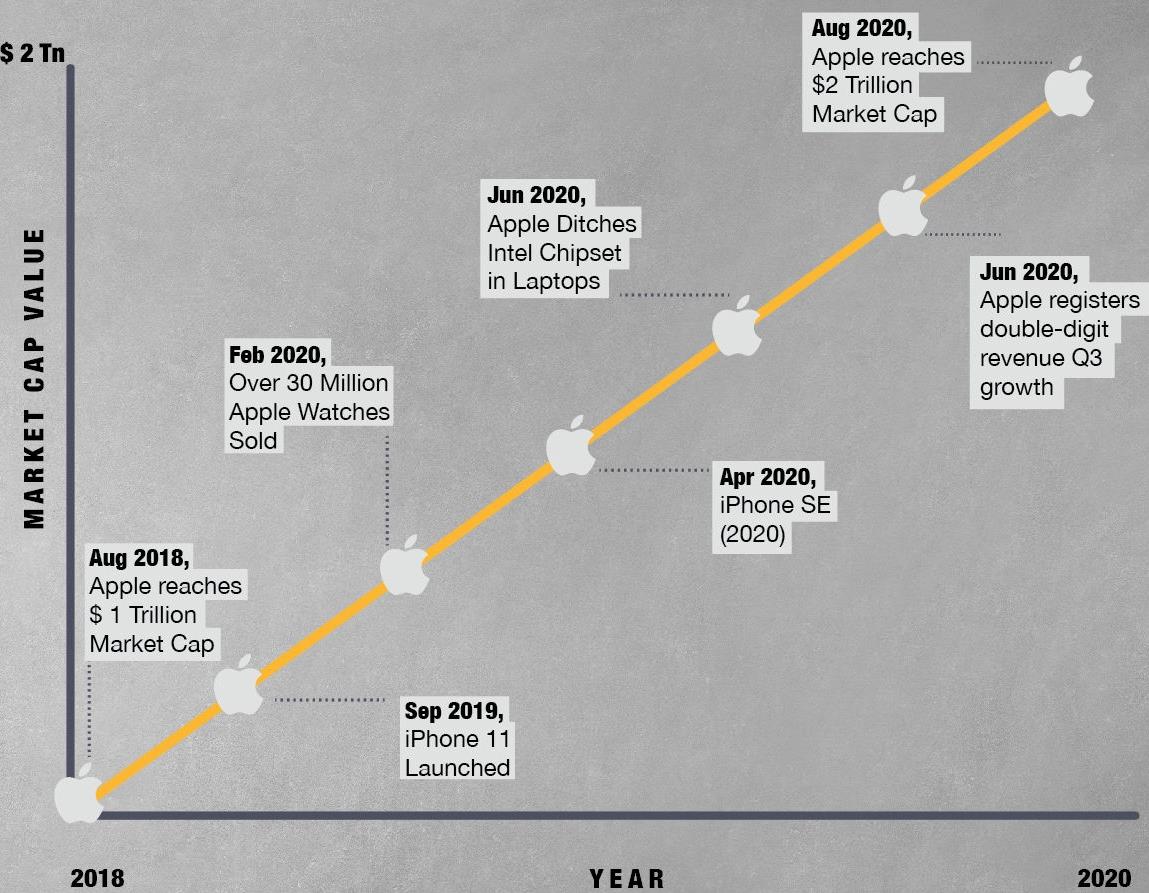 What to expect in the future

As Apple surges to $2 trillion market capitalization, it is not surprising to see that its market value is higher than the Gross Domestic Product (GDP) of many developed countries including Canada, South Korea, Russia, Italy, and Brazil. Having mentioned this, Apple shares, on the contrary, are about to get more affordable. According to the reports, the company will be finalizing its four-for-one stock split which means a single share will be worth around $117. This will not change the value of the company and will ensure the availability of shares at lower prices.